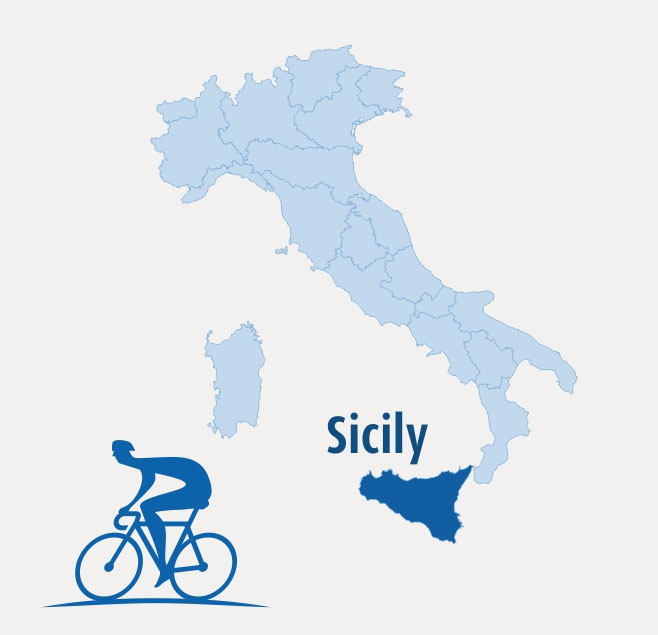 A distinct yet indescribable island, beautiful Sicily has withstood centuries of tyranny and upheaval to emerge as a vital and varied cultural region, as you’ll discover on this action-packed bicycle tour.

The Mediterranean’s largest island, Sicily’s soil and architecture reveal layers of intriguing history left during its rule by Arabs, Greeks, Romans, Saracens, French, Spanish, and Bourbons, and all their influences are still felt today. Focusing on Sicily’s lush green spectacle in springtime and its vast golden stage in autumn, our bike trip itinerary ranges from the southern and northeastern tip of the island to beautiful and historic interior areas never seen by most tourists.

Sicily has a rich and unique culture, especially with regard to the arts, music, literature, cuisine, and architecture. It is also home to important archaeological and ancient sites, such as the Necropolis of Pantalica, the Valley of the Temples, Erice and Selinunte.

Sicilian FOOD
Resting just off the toe of Italy’s boot, Sicily’s size (it’s the biggest island in the Med) and rich history (the first signs of human life date all the way back to 12,000 BC!) afford it a rich culture unmatched by other regions.

While the flavours of Sicily are unmistakably Italian, over the centuries they’ve acquired Greek, Spanish, French, and Arabic influences, resulting in a cuisine that’s (almost) as diverse as it is delectable.

From sweet cannoli to hyperlocal cheeses, twirl your fork around a few of our favourites.

Arancini
Literally translating to “little orange,” these fried, stuffed rice croquettes pack a big punch.
Savoury and satisfying, you’ll usually find them filled with ragù, mozzarella, or peas, but other variants include a side of butter or bechamel sauce, or fillings of mushrooms, pistachios or eggplant.

Cannoli
Hailing from Palermo and Messina, cannoli (which is the plural term, the singular of which is “cannolo”) were historically served as a sweet treat during Carnevale. But as mere mortals, medieval Sicilians couldn’t resist the urge to indulge year-round, and it soon became a staple of Sicilian cuisine, which the rest of Italy was all too happy to adopt!