Off the beaten path of bike trip in Puglia

The map says Italy, it is south point of heel of the boot shape: Salento
Though you may feel you’ve strayed into Greece, and that’s a part of Puglia’s appeal. Endless olive groves, a rugged coastline and the blue-green Adriatic.

Bike ride past ancient stone villages, prehistoric menhirs and crypts into the picturesque seaside town of Otranto, then dinner by the sea in this former Byzantine stronghold.
Explore a scenic cliff-side grotto and cycle along the coast to the southern tip of western Europe with views all the way to the Balkans on a clear day.
Cycle past the Alimini Lakes and through the Graecia Salentina, an area famous for its charming, historic villages and the distinctive local dialect.

The tour starts and ends in the gorgeous city of Lecce.
You’ve found your perfect cycling trip

Arrival in Lecce by train or by private transfer.
One day to visit Lecce and explore the surrounding delighting your sense with the local food & wine, astonishing your view with the Baroque architecture, Castles and Palaces that make this region unique. Take a walk in the beautiful historical center of Lecce, losing yourself among its baroque palaces, do not forget to visit the cathedral and its square, the Church of Santa Croce and Amphitheater.

Bike ride from Lecce to Gallipoli - Distance 60 km /37,5 miles
Terrain: Flat
After breakafst Meet&Greet at hotel and professional bike fitting.
Start the ride cycling towards the Ionian coast via Copertino explore charming villages and fascinating landscape - Reach the coast at Sant’isidoro where amazing beaches await for you – a stop for a jump is suggested. Continue skirting the coast going south and pass Santa Caterina e Santa Maria Al bagno- many option to stop for a lunch on beach club – arrive at the fishing town of Gallipoli enjoying the local food & wine with the people that craft it.
A must to do is the evening stroll in the typical streets of the old town

Bike ride from Gallipoli to Leuca - Distance 55 km /34 miles
Terrain: Flat
Leave Gallipoli along the beautiful Ionian Sea, directed towards south: today Cristalline water, amazing rocky gardens and eclectic villas, more epicurean adventure will disclose the eastern strip of Italy after a coast to coast ride to reach the Adriatic sea.
Cost about 25 km away and arrive Torre San Giovanni and continue to Torre Vado, Torre Mozza and San Gregorio another 25 km towards the southern part of the heel of the boot: Santa Maria Di Leuca. Here the land ends at a lighthouse and sanctuary that has drawn pilgrims for centuries. Do not miss art nouveau buildings and the basilica de finibus terrae of Santa Maria Di Leuca

Bike ride from Leuca to Otranto - Distance 54 km /33,5 miles
Terrain: Rolling hills
Today is the most spectacular ride: from Leuca , the direction of your cycling route will be the North, and with the Adriatic Sea on your right you will cycle towards Otranto distant about 55 km, crossing Tricase Porto and Castro Marina and Santa Cesarea Terme. Do not miss to stop at medieval village of Castro and Cave Zinzulusa adn Porto Badisco - called the baia di Enea
Once in Otranto we suggest the visit of the town: the beautiful Cathedral with its rose window and interior mosaic, and the Aragonese castle and its defensive walls. Strongly suggested a sea fish dinner.

Bike ride from Otranto to Lecce - Distance 60 km /37,5 miles
Terrain: Flat
Skirting the coast pedaling north, along Alimini lakes , ponds of fresh water flowing into the sea, after about 20 km you will reach the seaside town of Torre dell’Orso, a must: beach and swim in a fantastic blue sea. pass San Foca and the the Cesine WWF natural reserve, famous for bird watching before arrive the little town of Acaya, with a huge castle at short distance from Lecce.

Enjoy your farewell breakfast at charming hotel in center of Lecce 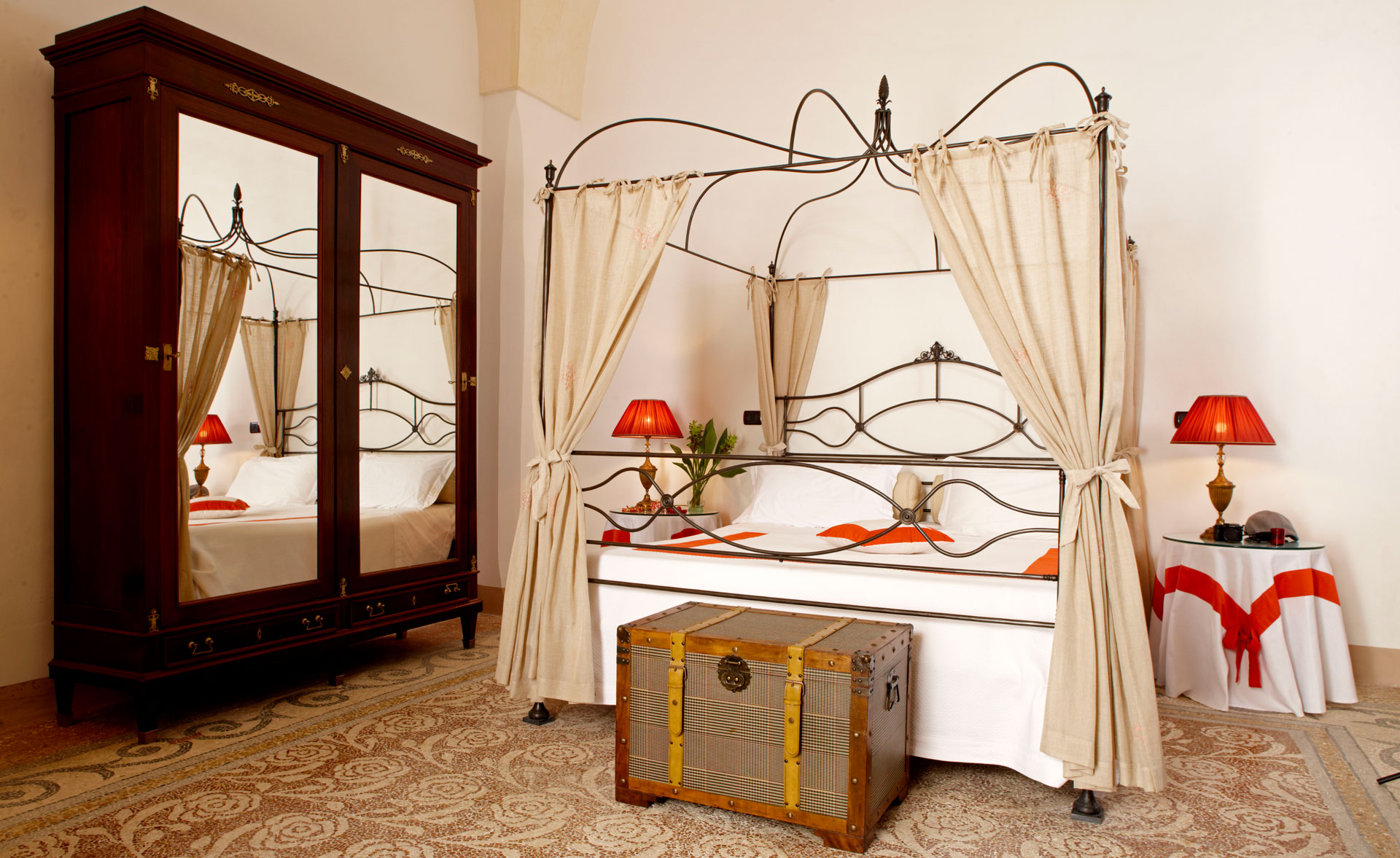 Palazzo Mosco Inn is a period residence of the nineteenth century, located in Gallipoli, in the heart of the old town centre, still nowadays a fishing village. Among the lanes and the small courtyards that smell of history and tradition, behind the beautiful St. Agatha’s Cathedral, Palazzo Mosco Inn is the ideal place to enjoy the comfort of a beach holiday in the centre of the town, close to historic sites, cultural places and amazing landscape. 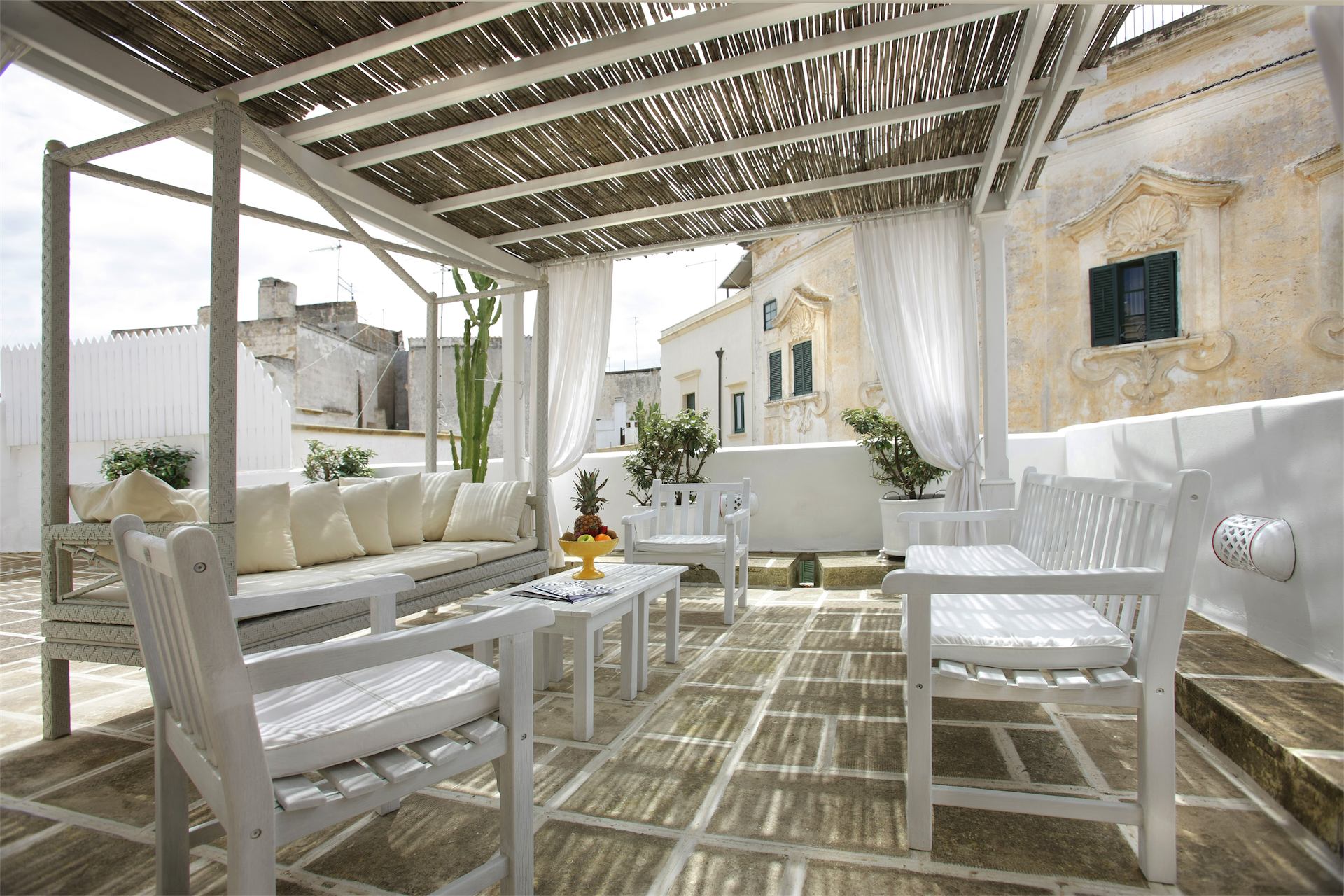 Relais Corte Palmieri is a wonderful historical house dating back to 1700 situated in the dense maze of alleys, streets and squares of the famous fishing village of Gallipoli. Characterized by sunny terraces and walls covered by colorful bougainvillea, this beautiful unique building, evocates a Moroccan Riad. 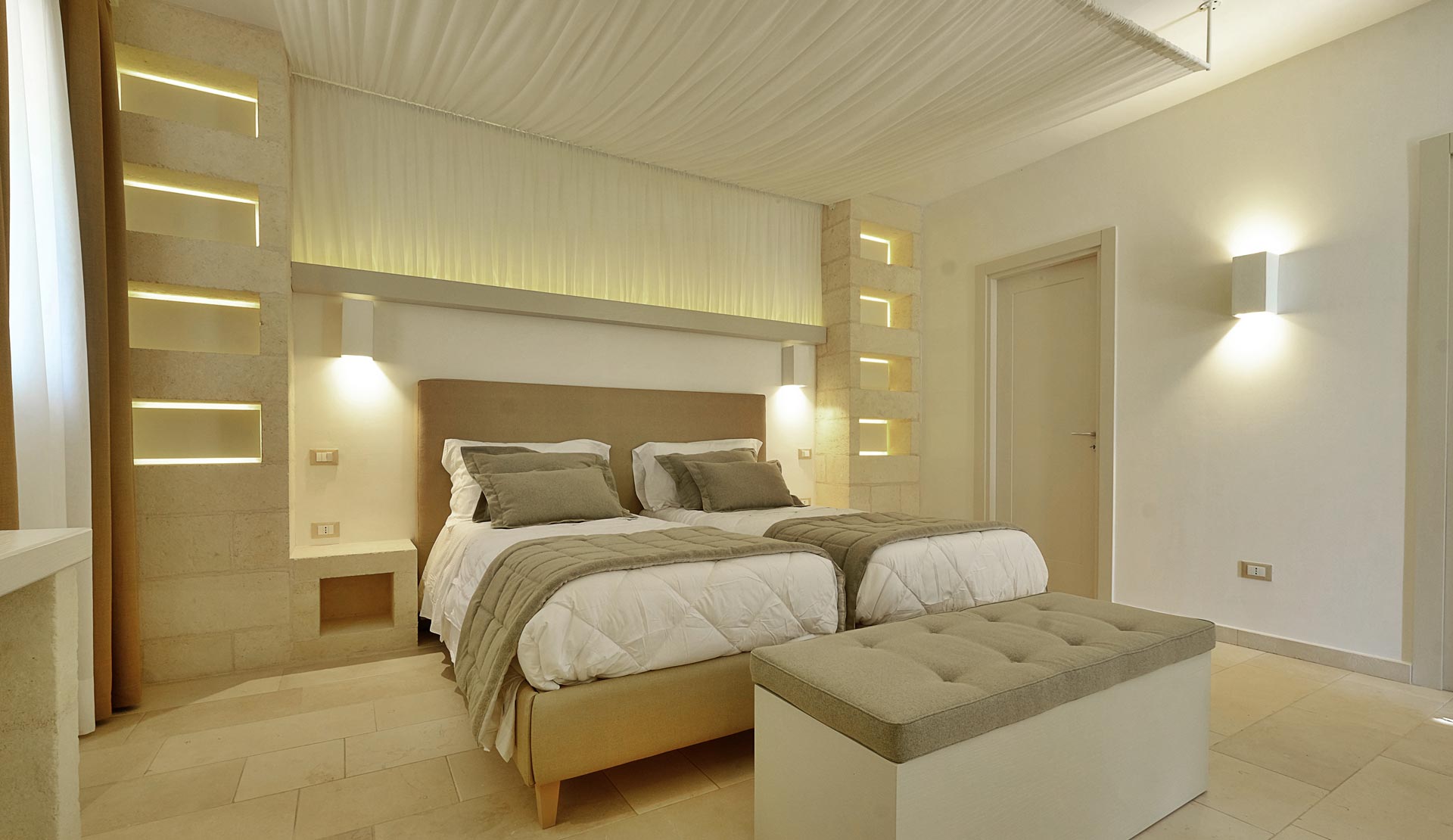 Heralding spectacular views over a beautifully landscaped mediterranean garden. as the only retreat in over 12 acres of unspoiled wilderness teeming with wildlife to explore exclusively, your experience at the Montiró hotel is intimate and truly exceptional. 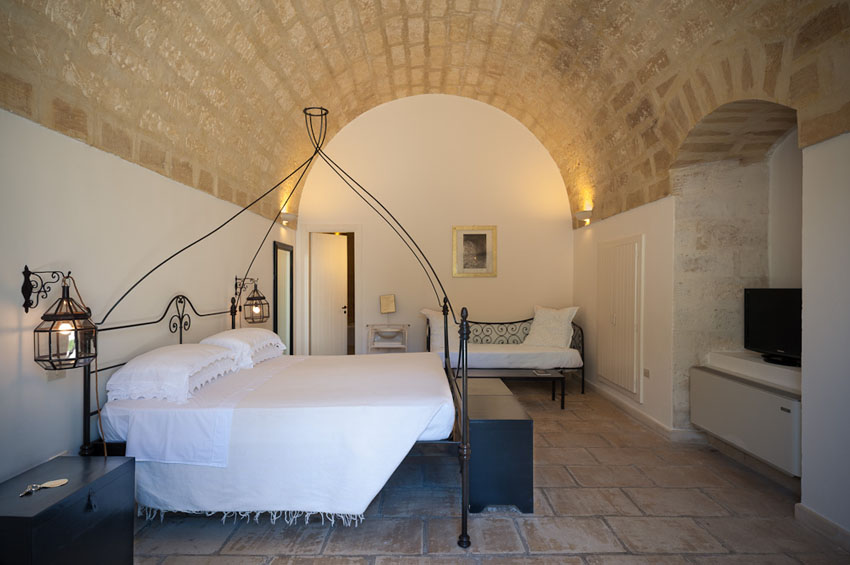 Masseria Montelauro was originally a traditional farmhouse, built in 1878. The striking light and local colours are reflected in the design, which has retained the ancient stone walls and attractive old olive trees. Guests can soak up the the warm atmosphere of Salento here, simply sipping a glass of Negromaro wine beside the swimming pool, surrounded by an orchard – or relax in the small spa.

We loved our trip in Puglia and enjoyed the scenery, towns, hotels…and definitely the food! The riding is definitely easier than in Tuscany (almost no hills)…but we did miss the smooth, freshly paved roads of Tuscany!
Martin needed his bike changed, for comfort, and they responded quickly, solving everything right away. A great addition to the trip was that they gave us a lot of information about the people and food of Puglia. In fact, Laura provided many interesting food related stories and contacts of who to visit/where to eat along the way. We enjoyed that so much that we hired her for a gastronomic day at the end of the trip and visited a market, olive oil farm, cheese making and then made our own pasta..an awesome day!

Giuliana it was fabulous. We really enjoyed the region, the people and the food. We thought your organisation was great and we’d throughly recommend both you and Puglia to anyone!

from March 15 to November 15th